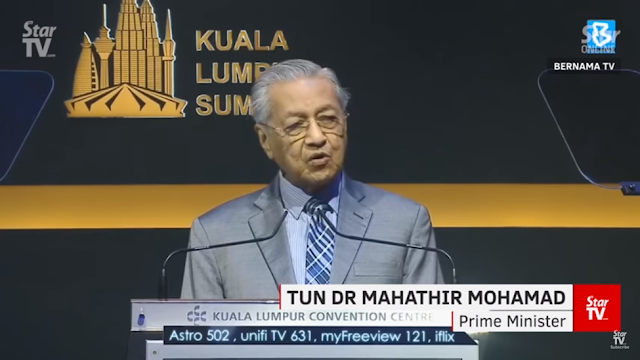 “During the course of our discussions with leaders from Turkey, Iran, and Qatar. We share the sentiments that for these efforts to work, we need to keep the initial group small so that We can pursue the objectives immediately without having to be distracted by too many opinions and conditions.”

“Ladies and gentlemen… the other leaders and myself have elaborated at length on how pitiful the state of affairs of the Muslim world is today. It was pointed out… that We are a 1.83 billion strong which means that Muslims from almost a quarter of the total human population, and yet… We lack a proportionate representation in all fields on the global platform.”

“There is also concerned that Muslims in non-Muslim countries are forced to undergo assimilation. We support integration, but assimilation to the extent of shedding our religion is unacceptable. It was pointed out that if Muslim countries are independent and capable of standing on their own feet, we will not be subjected to such Treatments. Nevertheless… leaders of all four countries were especially heartened by the brotherly and friendly relations that have strengthened despite the complexities of the region. These, to us are the very essence that will ensure the foundation that We want to build will be successful.”

“It is important for me to point out that Iran in particular… despite the years of sanctions had been able to continue to progress and develop and it proudly stands as a nation with the fourth greatest number of Engineers in the world. Qatar to, have been subjected to embargo and like Iran it has managed to rise above it and progress impressively, however such sanctions and embargoes are not going to be exclusively for Iran and Qatar… with the world witnessing nations making unilateral decisions to impose such punitive measures Malaysia, and other nations must always bear in mind that it can be imposed on any of us.”

“Ladies and gentlemen, our discussions also touched on the subject of currency, and the way We trade with each other… I have suggested that We revisit the idea of trading using the gold Dinar, and barter trade among us…… We are seriously looking into this and We hope that We will be able to find a mechanism to put it into effect. Our focus is mainly on the economy, science, and technology, as well as the defense industry. But the most important aspect of all… the focus is the need to be able to produce and create new indigenous technologies… for us, for as long as for as long as We are dependent on the technology created by the enemies of Islam they will forever be able to circumvent, dictate, and control our efforts to improve our technologies and defense system in particular.”

“Ladies and gentlemen, I am indeed proud and extremely pleased to announce that this summit witness 18 successful exchanges of instruments in various fields including… including advanced in high technology, media collaboration, center of excellence, food, security, and youth leadership and exchange programs. There are several more in the pipeline which are being worked out resulting from discussions during the summit."

“Ladies and gentlemen, We have come to an end of the summit… but We know if We strengthen our resolve, this is the new beginning one that pursues what had been enjoying in the Quran that Allah will not change the condition of people as long as they do not change their state themselves.”

Popular posts from this blog